I own at least three audio CDs where dumping with my BW-16D1HT and the /mr flag is always unable to proceed with dumping the disc (Cache is short), even with 999 retries.

I guess it's just  BW-16D1HT limitation and nothing can be done in software, i.e. in DiscImageCreator.

yes, I understand, why Multi-Session support was removed with Plextor CD drives in the General case, but why remove it in case of Cactus protected CD, when the only confirmed Plextor drive (so far) that can do it is PX-5224? just ignore the 2nd session do not dump it - it's garbage data. It's very easy to detect, at least Cactus CDS200 V5, please, read my details below:

Maybe my main point was missed in the conversation - the 2nd session is just there as part of the protection, i.e. to even further confuse the drive on top of the C1/C2 errors pressed on the discs at the factory.

So, the 2nd session is additional lawyer of protection similar to how Key2Audio protection uses fake sessions, etc. Isn't then the logical thing to do - check for Cactus and if yes then ignore the 2nd session and dump only of the 1st session (if necessary, I am not familiar and knowledgeable about image formats, fix the dumped image to indicate only one session or if that's hard, not possible or not preferred, fill with 0x55 or 0x00 or something like that for all data in the 2nd session - do not care to read that garbage from the disc).

* How to detect Cactus:

- at least Cactus V5 is ultra simple to detect, because there is file:

that in case of the latest revision (at least known to me, it's also the hardest protection for a drive to overcome) and on which I am testing contains:

What do you all think about the following ReDump/DiscImageCreator Standard for Cactus discs:

* add check to DiscImageCreator about "\player\version.txt" file on the CD, if it's there, read and report the Cactus version back to the user, in such case allow use of PX-5224 (even better inform the user he/she needs PX-5224 and quit otherwise). Dump only the 1st session, discard the 2nd session as it's just garbage data. Preferably, even add command line-switch to DiscImageCreator for the user to select it's Cactus disc manually, if for some reason the Cactus cannot be detected - I am suggesting such option, because on some discs both "A-Ray Scanner" and "ClonyXXL" tools fail to detect the Cactus, because there is no "\player\version.txt" file, which is very rare case (I have only one such CD). You can see all Cactus versions I listed in a table here:

BTW, Sony seems to do exactly what I am suggesting above in the firmware of their PS3 BD Drive - I tested it today connected to PC - for Cactus disc it doesn't even need authentication to read it, but it hides the 2nd session makes the disc look as single session to the computer. Also, interesting fact that I found - it seems Sony process the Cactus disc entirely in PS3 BD firmware, because the drive rips all tracks correctly, but with +2305 offset, no matter what offset is set in ExactAudioCopy. So, PS3 BD drive also is capable to fully overcome Cactus like PX-5224, but it seems in a different way - hides the 2nd session and adds that weird +2305 sample offset to each track. However, PS3 BD drive is amazing - rips Cactus 2 times faster than PX-5224 without any single error - all bytes are correct - compared in Hex-editor, just  that 2305 samples offset is added to the beginning of each track. So, PS3 BD C1/C2 error correction is out of this world - to fix 8000 such errors on such high read speed - I tested over 30 other drives on Cactus so far and PS3 BD drive blows my mind (KEM-450 drive from a slim console), really unbelievable and amazing! Especially, when drives like Asus  BW-16D1HT fail so spectacularly on Cactus disc and go to 0.3X speed, struggling and struggling.

[EDIT] even in cases when  both "A-Ray Scanner" and "ClonyXXL" tools fail to detect the Cactus, it's still very easy to detect it, because there is "CACTUSPJ.EXE" file in those cases. So, based on that I guess the correct detection algorithm (at least for the time being) is: check for "player\version.txt" file and if there is proper "CDS200" string  inside it with version report it, if no then check for  "CACTUSPJ.EXE" and report some unknown exact version of CDS200 V3/V4 detected. I have no V5 discs without "player\version.txt". So, those without it are CDS200 V3/V4 for sure, they are also released 2-3 years before discs with CDS200 V5.

just ignore the 2nd session do not dump it - it's garbage data.

If you want to dump only the 1st session, why not use IsoBuster or others? Why are you particular about using DIC?

2nd session of CDS is not garbage. If CDS is preserved, 2nd session is also important. I don't ignore it.

Why are you particular about using DIC?

What is ReDump standard for dumping Cactus CDs? If I use IsoBuster then if ReDump will accept my dump information? How is supposed to dump Cactus CDs compatible with ReDump standards based on available hardware software and their respective limitations? that's what I don't get. sorry, I am newbie here and maybe I am missing some point... thank you!

What is ReDump standard for dumping Cactus CDs? If I use IsoBuster then if ReDump will accept my dump information?

because it's using one of the latest CDS200 revisions and thus is hardest for a drive to read. BTW, CDS300 has nothing to do with CDS200 and CDS100, as I pointed out here:

[EDIT] for barcode 724386620323: attaching screenshot of the correct CRC hashes for each track - only possible to get with PX-5224 and NEC ND-3530A, but of course the NEC cannot do the last track with the same checksum, because it has no LeadOut capabilities.
[EDIT2] one correlation that starts to emerge is that all NECs and all Plextors that don't work use Sanyo DB-10 and DS-11 Optical pickups (OPU). ND-3530A is the only one in the whole 35xx and 45xx series that uses Sony OPU, in fact that is consistent with my PS3 BD drive test - another Sony OPU and both drives work. PX-5224 is neither Sony OPU, nor Sanyo, but the point is that it's not with Sanyo.

Here? https://www.discogs.com/ja/Joss-Stone-M … e/10201650
redump.org will not want the general music disc. It is the reason why I recommend other software to you.

What is Redump.org and what is your goal?

Redump.org is a disc preservation database and internet community dedicated to collecting precise and accurate information about every video game ever released on optical media of any system. The goal is to make blueprints of the data on console and computer game discs. Redump.org also provides guides to ensure the dumps are correctly done. Users of the website who follow the guides correctly are encouraged to share their results to help build the database. Multiple dumps of games with the same serial number by different people are collected to ensure the same results are gathered, which help correct any incorrect dumps in the database as well as to help recognize alternate versions of the same game.

I understand and so the case is closed. I do have and I submitted some dumps:

for verification, because I still haven't found something that I have and it's not already in the database.

I can't dump a CD from the Zozo Mix newspaper. Every time after doing ISO, I get "Failed to analize sub-channel" error. This is what the logs look like - https://drive.google.com/drive/folders/ … sp=sharing

Another CD that I can't dump is also from the Zozo mix newspaper, but from a different issue (1/08) - https://drive.google.com/drive/folders/ … sp=sharing

CloneCD will create a dump with .ccd, .img and .sub files. Try to complete a full dump to get the .sub file.

OK, so here are these sub files from CloneCD (I threw sub files from both Zozo Mix discs because I can't upload both of these discs to this page) - https://drive.google.com/drive/folders/ … sp=sharing

Another album that I cannot throw off is one from the Świat Przygód z Hugo newspaper 4/2008. The files on this CD are packed in some strange way and the CD itself reports errors, although the back of the CD looks pretty OK - https://drive.google.com/drive/folders/ … sp=sharing

Another CD that I can't dump is also from the Zozo mix newspaper,

here are these sub files from CloneCD

There is no problem about Clone CD sub. I'm not sure why DIC can't read it correctly.

Another album that I cannot throw off is one from the Świat Przygód z Hugo newspaper 4/2008.

There are C2 errors. 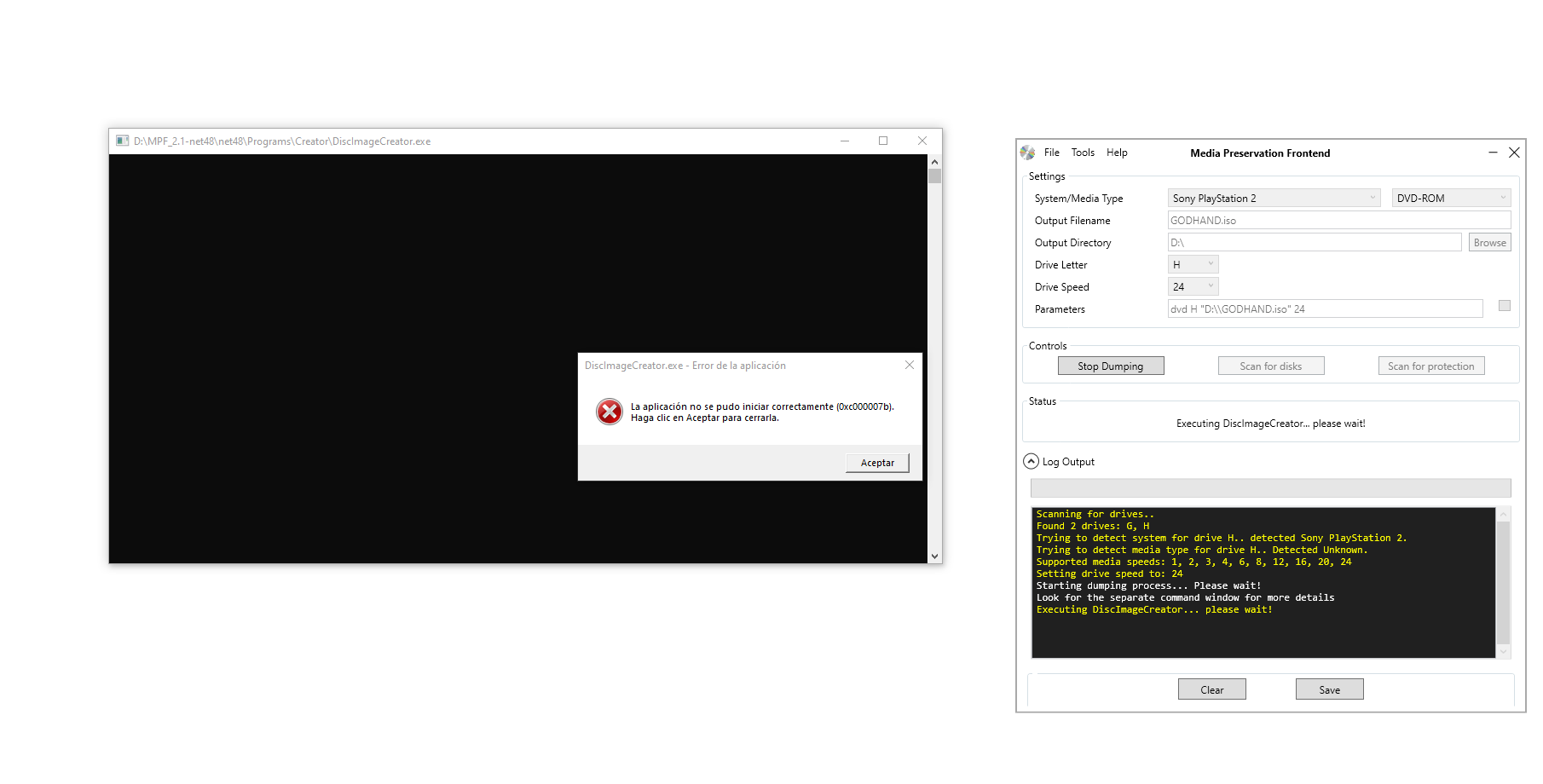 First I would make sure no file is corrupted for me, I have: Version 2.1-7f4921a4 make sure the hashes for the files you have match these:

If something is different I would redownload the program: https://github.com/SabreTools/MPF/releases

Sarami, could you add 0x55 as an option (preferably the default) for /ps so DVD error padding is consistent with that of CDs and other discs (we use 0x55 for Datel protected Nintendo discs too, for example)?

Default = impossible because load of IBM PC DVD discs with ring protection have data padded with 0x00. Like this one:
http://redump.org/disc/60860/

What is the problem? My unlicensed is no problem.