The CD-i disc Alien Gate 810 0049 is not recognized by any of my 4 disc reader/writers in 2 different PCs. Not by any program I tried so far. Not DIC, not CDManipulator, not Nero, not CloneCD (latest version), not by many more, not by anything. In fact all programs claim there is no disc at all and on one PC a very strange intermittent funny sound (never heard before) is produced every ten seconds or so. It seems that this disc is protected under windows 10 or something? The kicker is that it plays just fine and without hesitation in my CD-i 210/20 player... never seen this behaviour before, even DIC throws, after pressing the button " .... proceed to dump anyway" immediately a fault tone and does absolutely nothing.

Who knows about "protected" discs like these and how to circumvent this issue?

Well it's not a surprise if Windows doesn't recognize it since that's common for CD-i.

>after pressing the button " .... proceed to dump anyway" immediately a fault tone and does absolutely nothing

Do you have the correct drive letter selected? One of our other members just bought this disc as well, so we will keep you updated on how it works for him. I'll keep an eye out for a cheap USA copy as well on ebay.

Thanks for reporting this, for whatever coincidence a lot of CDi research is coming together at roughly this moment of time (I just bought about 90 CDi discs and a friend bought more), so all this kind of info is very helpful.

I talked to a couple other redumpers with this disc. They're having similar issues regarding it. Probably will require some deep diagnostics so it's okay for you to skip dumping this one. I have a feeling the solution will be very tricky ...

"Well it's not a surprise if Windows doesn't recognize it since that's common for CD-i."
Yes, obviously, well aware, I merely stated that, to reference to the usual modus operandi.

"Do you have the correct drive letter selected?"
After the usual drive, I tried after that on three other drives. Same result. So, yes drive letter correct.

"so we will keep you updated on how it works for him"
That would be nice.

In the meantime, I noticed that the drives produce after a minute or so a very strange mechanical noise, like the arm of the optical reading device (with the laser on it) it trying to go to a place where it cannot go and hits a end-barrier. It is a quite ominous sound, and one one PC there is even an audible (alarm?) sound coming from the speaker I've never heard before. Could it be that regular drives on Windows are fooled into thinking the TOC is elsewhere and that under the OS in a CD-i player this jump is ignored, sine it almost immediately plays there (tested that)? I'll try to record that weird sound and post it here, won't be soon, no time anymore today or tomorrow...

"I have  feeling the solution will be very tricky..."
Me too... never had a imaging/copying problem of any CD so far ever before like this... always found a proper drive/fw/sw combo, and have experience since 1985 or so... but, must admit, never copied imaged CD-i's before recently...

So, further explanation of the weird sound, I have made a video of it. It appears under the following circumstances:
- CD-i Alien Gate (as described above) is in a Plextor drive PX755A (built in in a PC through IDE cable), also CD audio connector is connected to the MoBo
- Trying to copy the CD-i disk with (latest) CloneCD
- while the CD-i is being read by CloneCD, unsuccesfully I might add, it stays in the popup window trying to read the disc
- the sound then appears through the monitor speakers after a while, every 12 seconds or so, and after a minute or so it completely stops and CloneCD throws a popup with "enter a disc in the drive..." (right: it does not recognise a disc at all in this case: where it normally just starts dumping any CD-i to an image...)
This is the weird sound
It sounds a bit like the clock at Disney's "It's a small world"(Yikes...).

I have another PC with another Plextor drive, but mounted in an external USB casing connected to the PC, no audio connection. It also makes a weird sound after a while under the same circumstances, that somehow resembles the other sound, but it does not come through the speakers, but seems to come from inside the USB enclosure, either the drive or a piezo beeper trying to mimick the sound.

I have no idea what it is, never heard it before in my life. No other indications whatsoever.

All other copying or dumping software fails to read or recognise this CD-i, but no other invokes this sound, so far.

>In the meantime, I noticed that the drives produce after a minute or so a very strange mechanical noise, like the arm of the optical reading device (with the laser on it) it trying to go to a place where it cannot go and hits a end-barrier...

I haven't noticed any fake TOC CDis yet, but might be worth dumping a regular old cd-rom or audio cd to see if it makes the same noise. Could be the disc or your drive going.

I snagged a USA Alien Gate, I'll be sure to let you know the results.

Nothing wrong with either drive, I have dumped and copied numerous other discs in the meantime, I just put this one aside after several tries. The fault is reproduceable with just and only this disc, no others: other discs don't throw any tantrums, so no weird sounds, no hangs, no problems. I have successfully dumped and copied about 15 discs since then and tried the copies on my CD-i player, no problem. Except for some (2) CD-i Ready format discs, where DIC does not come up with the submissioninfo.txt form to fill out (see elsewhere), resulting in a slightly incomplete dump.
The same playability on my CD-i player is true for the CD-i disc Alien Gate: it plays flawlessly in my CD-i player, no hesitation whatsoever, but just nothin' in other drives.

I'm kind of expecting the same result from the USA copy, but I'll do some inspecting.

CDi is largely uncharted territory here, so this research is important.

BTW we also have VCDs (relevant to CDi) and CDi Digital Video (movies) entries up on redump as well, though they are hidden until you are granted "Dumper" status, which should be soon.

I have several CD-i's and Digital Video on CD-i's dumped and ready for upping, except for the ring photos, so still some work to do. I have many more CD-i games etc. dumped and ready to be upped. I will focus on them first then.

I just dumped Op Jacht Naar Vernuft with CloneCD for testing purposes - first track data (non-Windows filesystem) followed by redbook audio tracks - the .img was 908MB (bigger than a CD), so I see what you mean about some TOC nonsense. I'm sending this to a friend to poke around with and will let you know what I find.

I will purchase Alien Gate from a friend of mine in Europe to dump I think.

You need to dump it with the swap method, then. DIC has a separate mode for that. The drive will only read the specific sectors without trying to decode its damaged/confusing TOC.

i think this is dic error, some how do mistake 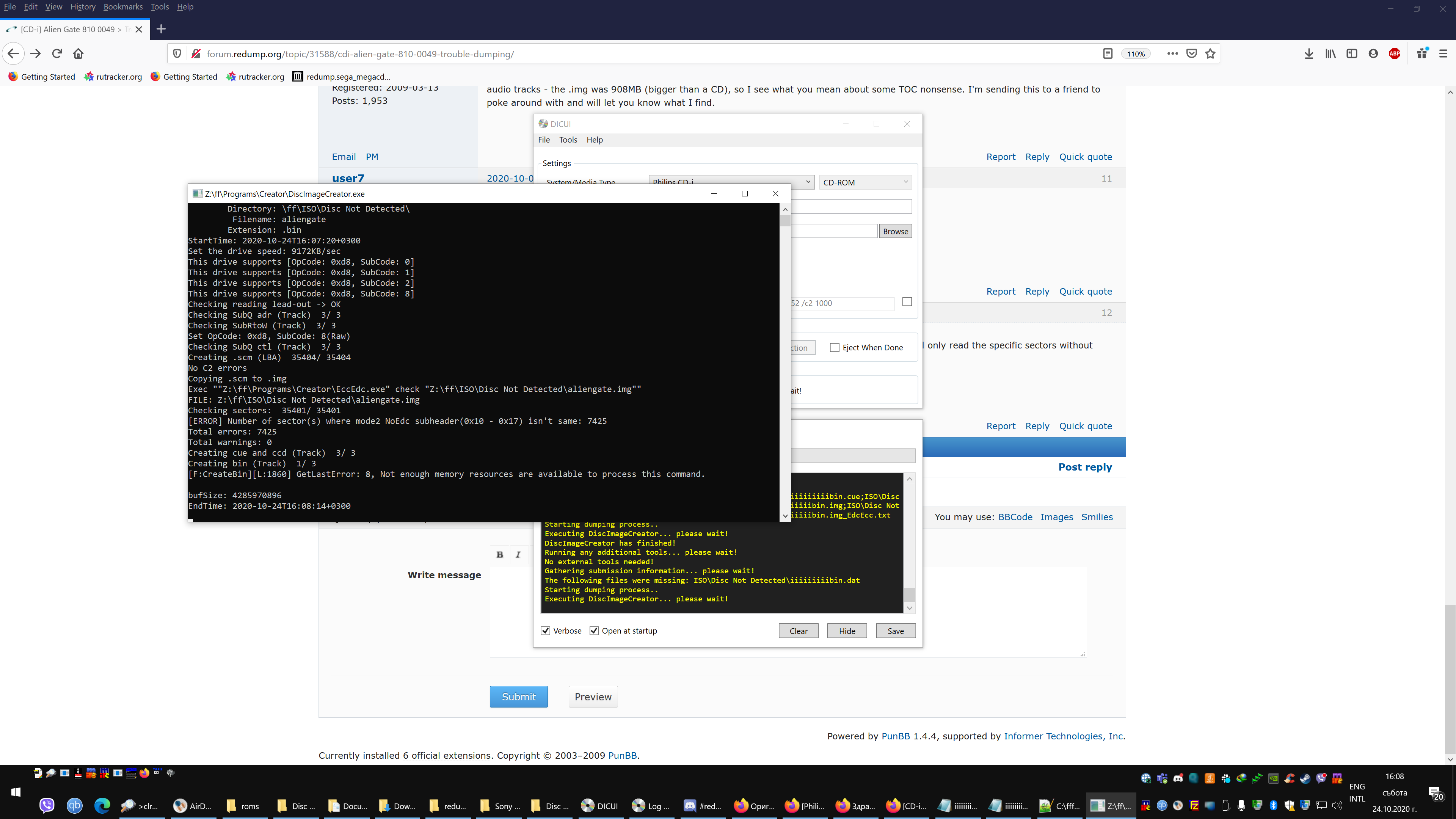 here is dumped with isobuster
https://forest.no-ip.org/redump/aliengate%5Bcdi%5D.rar

i hope some one to solve this mistake ..

In case you're feeling brave and want to test the swap disc method:

Btw that png link isn't working for me. Neither are the other png links you've posted.

not working ...
problem is different,
just dic not handle this disk ..